Bodegas Emilio Hidalgo was founded in 1874 and has developed an international reputation for producing elegant, refined Sherries. Located in the historical heart of Jerez de la Frontera, the winery is housed in a late-19th century building of classic construction — thick walls, large windows, high ceilings and tiled roof — ideal for the fermentation and aging of Sherry.

By the beginning of the 20th century the winery was already well established, with a devoted following in Spain and the U.K. By the 1970s, Bodegas Emilio Hidalgo had expanded exportation to discerning Sherry drinkers in Germany, France, the Netherlands, Belgium, Austria, Italy, Denmark, the U.S. and Japan.

Today, the fifth generation of Hidalgos runs the winery, carrying on the family’s rich Sherry-making heritage. This new generation maintains the traditions that have been carefully preserved and enriched for more than 130 years. Through their efforts, Bodegas Emilio Hidalgo continues to be recognized worldwide for its high quality and distinct style. The winery has received countless accolades from Sherry connoisseurs and top critics.

Emilio Hidalgo is located in the heart of Jerez de la Frontera, in DO Jerez-Xérès-Sherry. Palomino, Moscatel and Pedro Ximenez grapes are grown in three types of soil: limestone-rich albariza, clay-dominant barros and sandy arenas. This varied yield of grapes gives Hidalgo’s skilled cellar master a wide range of options in the crafting of their Sherry.

Hidalgo has had the same cellar master, or capataz, for the past five decades, continuing the artisanal ways of the winery. An expert at managing the house’s various soleras, he employs a system of fractional blending, using smell and taste to monitor development and to create Hidalgo’s famously complex Sherries.

In the great tradition of Jerez, Hidalgo’s winemaker is the capataz of the winery. Yet, he is more of a caretaker of the wine. Hidalgo wine develops in-barrel, while he oversees and guides this development. Historically, a capataz hones his skill rising through the ranks, learning what different types of wines “should” smell and taste like, according to house style.

Hidalgo’s current capataz is Manuel Nieves. Raised in Jerez, he learned much from his father, who also was a capataz. Manuel came to Hidalgo in 1959, and, as is the tradition, he learned the trade from his predecessor. He became Hidalgo’s capataz in 1972 and has continued to produce the same level of high-quality wine for which Hidalgo has been known. Upon his retirement, his son, Manuel Jesus Nieves, is slated to replace him.

Since taking his licentiature in Chemistry in 2004 from the University of Cadiz, Manuel Jesus has worked full time as Hidalgo’s oenologist and apprentice winemaker. Prior to that he spent many summers working in the winery and picking grapes during harvest. New times require new methods, and Manuel Jesus brings a modern scientific touch to Hidalgo’s traditional method of wine production. 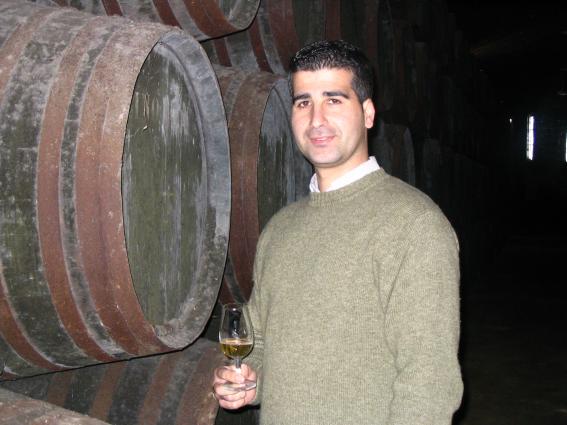