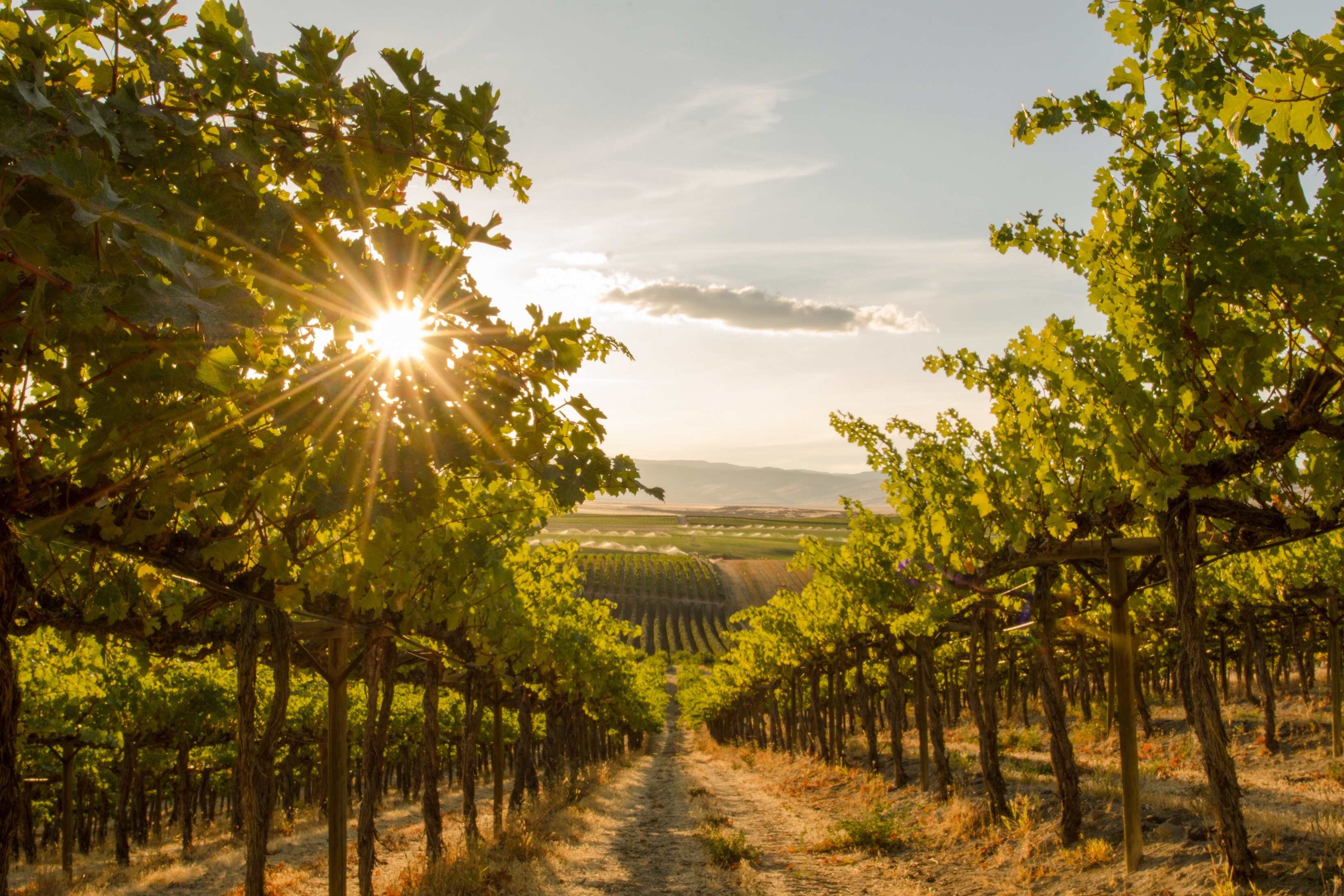 Washington State is climatically divided by the Cascade Range. The high levels of rain that maintain the lush pine forests and rivers of the coast are squeezed out before reaching the eastern slopes. This rain shadow effect drives the average rainfall in Eastern Washington down to seven inches per year. It is truly a stark contrast but one that benefits the fine wine industry.

The climate between the Cascades and the Rockies is semi-arid. Rainfall does increase to twenty inches per year as you travel to the eastern vineyards of Walla Walla. Irrigation access is an absolute necessity for vineyard management throughout the Columbia Valley and is a limiting factor for industry growth. The average latitude of 46o N, and the rain shadow, combine to offer near constant sunshine that pours into the vineyards for as much as seventeen hours per day during the growing season. The arid climate and increased elevation produce warm days and cool nights, that result in high levels of ripeness combined with noted freshness in the wines.

The dominant wine region for the state is the Columbia Valley AVA, which occupies over 11 million acres (4.4 million hectares), including about 15,000 acres (6,000 hectares) under vine. The Columbia Valley includes the eponymous river valley, the Walla Walla River Valley, and the Yakima River Valley. The most famous of the smaller AVAs are also found here. It begins in the hills, northwest of Spokane and crosses the Oregon border in the south. It ranges from the Columbia River Gorge in the west to the Idaho border in the east.

The vineyards are based on volcanic activity, the Missoula floods, and windblown silt. The bedrock of most of the Columbia Valley is basalt formed during volcanic activity that shaped the Pacific Coast. Then in the last ice age, the glacial lake, known to scientists as Lake Missoula, released several cataclysmic floods that shaped the land and deposited materials from far outside of the valley. The floods dropped large cobbles, gravel beds and silt. After the floods, wind then deposited fine grained loess on the hillsides. All these soils are nutrient poor and excellent for high-quality wine grape production.

The most famous sub-regions of the Columbia Valley are all in the southern half of the appellation. The oldest is Yakima Valley, the warmest is Red Mountain, and Walla Walla receives the most rain. More than one-third of the state’s wine grapes are grown in Yakima Valley and its sub-AVA.

The state produces sixty-two percent red grapes and thirty-eight percent white grapes. The reds are powerful and fresh with Cabernet Sauvignon shining brightly and Merlot being a perennial star. Syrah is noteworthy and on the rise, along with a wonderful mix of alternative European grapes. Riesling has deep roots here and ranges from simple to dry, powerful, and serious. Chardonnay is the most planted white and offers an experience between European and California styles. You will find a mix of other grapes to explore like Gewürztraminer, Viognier, Semillon, Chenin Blanc, and more.